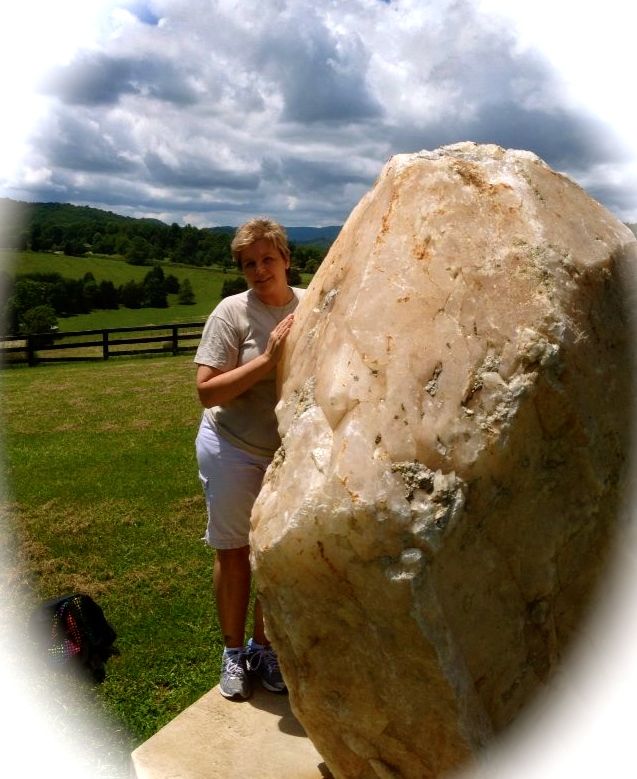 Imagine this scene, a rocky cliff in a forest with a stream leading to a small waterfall. The water pools at the base of the falls in a rock pocket and leaks through the cracks in the structure.

The water becomes trapped and is supersaturated with silicon. Time passes, the landscape changes, the water fall dries up and the earth shifts. The pockets of rock become buried and remain that way for along time. One day the rock is opened and the pockets reveal a cavern lined with crystals. This is the way quartz was born.

Quartz is a very common mineral and noted to be the most abundant mineral on Planet Earth’s surface. It is a chemical compound of silicon and oxygen, silicon dioxide SiO2, commonly called silica. Clear Quartz is also called Rock Crystal or Ice Crystal, from the Greek word “krystallos”, meaning “ice”, because crystal was believed to be water frozen so hard it could never thaw. 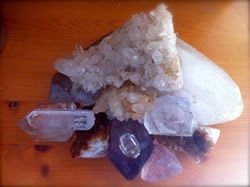 If pure, quartz is a colorless, transparent, and very hard crystalline material of glass-like look. Quartz appears in a number of colored varieties, like amethyst (violet), citrine (yellow), or smoky quartz (gray, brown to black). There is a lot of debate between science and metaphysical beliefs as to the power of quartz. Can it hold energy? Can it be programmed? Does it have healing powers?

Quartz crystal is valued for its piezoelectric properties, which means it can transform mechanical pressure into electromagnetic energy. It has the ability to focus, amplify, store and transform energy and is used in technology

around world in ultrasound devices, watches, microphones, radio transmitters / receivers, memory chips in computers and other electronic circuitry. That’s quite a lot for a pretty little stone!
Did you know it can produce light? Quartz crystals are? triboluminescent, which means light produced from friction. The word comes from the Greek word tribein, which means to rub, and the Latin word lumen, which means light. Triboluminescence is related to piezoelectricity.? Just remember, no quartz crystals were injured while making this movie!

Hitachi came out with a technology they are developing which is essentially saving data to a sheet of Quartz Glass, and they claim the data can last for a 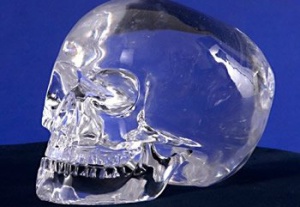 very, very long time. There is a drawback, the sheet of quartz doesn’t hold that much data, it’s kind of like an CD-R disc that fits on a one inch square, but the technology is promising. iPods started out as Sony Walkman’s so lets see how this evolves over the next few years. Makes you think about the Crystal Skulls, maybe they do store data, we just don’t know how to read it yet.